FileMaker Pro 15 or higher on OS X can be run only as a bit application. If you use bit-only versions of plug-ins, ODBC client drivers, or audio/video codecs with FileMaker Pro, contact the provider for bit versions of that software. FileMaker Pro 14 supports both bit and bit . FileMaker Pro 18 Advanced Use FileMaker Pro Advanced to design and create custom apps for your mobile device, computer, and the web. Also use it to access your apps on Windows and Mac computers. Single licenses are for individual users that do not need to share data with others. The electronic version of FileMaker Pro 18 Advanced includes a link to download a license certificate for installation and a link to download the product software. The software bundle includes the Installation Guide, available online. The boxed version includes a license key for installation and a.

Youve got an awful lot of text for only having one or 2 images. Maybe you could space it out better. Hey there. I've been reading your blog for a while now and finally got the bravery to go ahead and give you a shout out from Dallas Tx. Just wanted to mention keep up the excellent work. 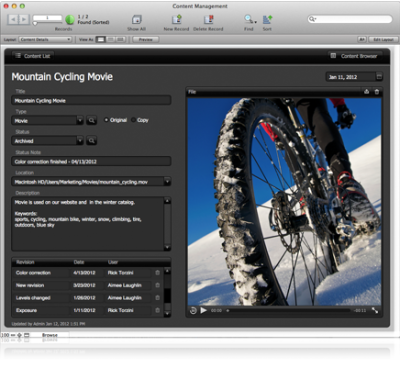 Since then FileMaker has had Plus, II and eventually Pro suffixes to identify the product and is now the most popular cross-platform database available, with the majority of its sales now going to PC users running Microsoft Windows.

The most common mistake newcomers make when assessing FileMaker is to underestimate its power and flexibility. This usually comes about as a result of seeing how quick and easy it is to create a very useful database without looking further at the powerful functions and scripting language waiting to be taken advantage of.

Simplicity and power in a single package! Possibly the biggest step forward is the integration with other technologies. We understand the trial status is more for commercial than technical reasons. New context independent card windows add to the options available when building the user interface.

This version completes many of the features partially implemented within the last 2 releases and introduces some that have been at the top of many developers' wish lists. FileMaker Server 16 can now create PDF files when running a server script or from the 4th release of WebDirect, which will remove the many work-arounds that have had to be setup over the last few years. WebDirect can now scale up to users by allowing up to 5 worker servers for each master server. Load balancing is automatically controlled by the master server.

Something that we believe has been understated is the ability to set data sources using variables, removing the need to manually set each data source and allow dynamic data sources when using the separation model. The data viewer within FileMaker Pro 16 Advanced now auto completes and an option to evaluate expressions automatically can be switched on or off and results within the Edit Expression window can finally be resized.

Security has been further improved with the introduction of OAuth 2. Data can now also be encrypted at field level using new functions. Layout design is significantly enhanced with the new Layout Objects Window allowing objects to be hidden or shown, the stacking order to be changed and interaction in many ways not previously possible that will improve productivity.

FileMaker Go 16 for IOS continues to have features added that include Location Monitoring to allow the geolocation to be monitored or identify known iBeacons within an area. There are many new script steps and functions, some covered within the above features. Notably, some features, previously only available within the Advanced version, have been made available within the standard Pro version, such as being able to copy and paste tables between files.

This provides much higher performance for large or complex solutions and all software is centrally managed by ourselves, removing the IT maintenance overheads and compatibility issues normally associated with local software installation. However, we have found this to be one of the best releases with a lot of focus 'under the hood' to improve reliability, performance, security and addressing some of the idiosyncrasies introduced within the previous version.

WebDirect continues to evolve and now supports publishing to web browsers on most mobile devices including IOS and Android mobile phones. FileMaker Server 15 introduces performance improvements, expanded and easier to manage SSL certificates, WebDirect improvements and enhanced logging. Perhaps the biggest change was the amendment to the end user license agreement that no longer allows sharing of the server between multiple tenants and the introduction of FileMaker Licensing for Teams.

The headline feature is a rewrite of the Script Manager, now called Script Workspace to allow faster script creation with auto-complete and searching for calculation functions. WebDirect continues to evolve with significant speed improvements and support for mobile browsers, including those on Android. Additional layout tools include the Button Bar and button icons in SVG format plus the first new layout parts for many years: Also added is a new Launch Centre, object component styles, in-field labels and a few new layout tools and functions.

Some welcome security enhancements have been introduced, inlcuding the ability to prevent login credentials being saved and stored on Mac and Windows.

FileMaker Server has a new 'reconnect to server' feature that allows FileMaker Pro clients to automatically reconnect after a network or power failure. Security has improved with a password strength indicator and password reset using a pin number.

Along with the speed enhancements a new standby server option is now available to ensure high availability where a command line instruction allows a switch to a second server. FileMaker Go 14 has a new user interface, launch centre, bar code insert, rich text editing, screen orientation control. Therefore we can pass on more informed comments having been developing in the software for this period. The highest profile feature announced was the introduction of WebDirect that allows access to FileMaker layouts using a web browser to provide a FileMaker-like experience.

Although we've found this very impressive, remember that it is a version 1 product and we can expect rapid and exciting development of this in future releases. Whereas, our experience of FileMaker 12 was that it provided challenges to developers, it was clearly a necessary step to allow FileMaker 13 to evolve. The new layout design and tools are brilliant and version 13 has more than compensated for the productivity dip that we encountered from using version 12 and new 'popovers' and 'slide controls' are revolutionising the way interfaces are being designed.

Less well publicised additions such as 'Hide object when' have removed the need for so many work arounds that had to be created in the older versions. The CSS based layouts introduced in the last version have been enhanced so that virtually all aspects of an object and layout can be controlled via styles and themes, allowing changes to be made throughout a whole database by changing an attribute within these.

A new script step 'Perform Script On Server' could turn out to be the biggest new feature of all, by sending a script to FileMaker Server it can execute up to times faster than those traditionally run in the FileMaker Pro client.

Again, this is prompting developers to reconsider their database designs. To summarise, after nearly 30 years of using FileMaker, this is far and away the best version yet! The big news is that we finally have a new file format with the previous '. The effect of this is that all database files have to be converted to the new format and old and new versions of FileMaker cannot be used to access the same database.

The headline features are: Enhanced layout design tools, aimed in particular for creating applications for the iPad and iPhone IOS devices that can run the newly released FileMaker Go 12, which is now free of charge.

Much improved container fields, where FileMaker can manage media files such as images, videos and graphics Improved charting Improved performance over wide area networks, with FileMaker Server becoming a 64 bit application However, as per previous releases, many of the less promoted additions will have huge implications on future database design such as: For the record, we've pieced together some history tracking the significant upgrades in the following pages.