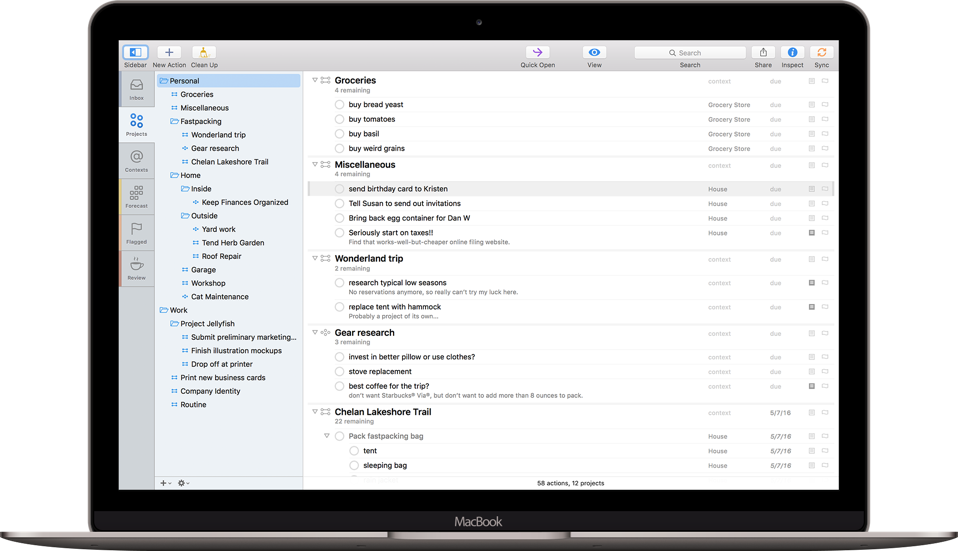 The database format is compatible to another, if you upgrade OmniFocus 2 to the latest version and mitigate the database to the newer format there is no downside to that. There are a few limitations: Repeating dates are more complex in OF3. If synced back to OF2, they will still work correctly, but you are unable to edit them. Contexts have been replaced with tags. It is possible to downgrade perspectives to OF2 format, but then new features are not available.

Why would anyone consider spending money on an upgrade? Well, first, there is a new look and feel with updated icons, fonts and colors. Not the biggest change, but still very pleasing to the eye. It comes with a revamped UI for iPad which improves it quite a bit on the tablet front. Then, there is a number of new features. Each has potential of changing how one could use the app in their workflows. Don't worry, OF3 can still be used exactly like OF2, if you are in love with your current workflows.

OF3 only adds new options. Productivity and workflows are highly individual, after all. I would not go as far as calling it a revamp in design language - but various color changes, bolder font styles, and stronger contrasts make the app more visually pleasing. Both the bright UI and the dark UI have been updated. I think it turned out absolutely gorgeous. The nice design also makes the application more fun to use, for some reason. Here is a screenshot of each. In the following, all iPad screenshots will use the bright UI, and all iPhone screenshots the dark UI, just so you can see both.

Of course, either color scheme is available on either platform. The macOS version also comes in two different color themes. There are no custom themes anymore, a feature which was available in OF2, but did not make it into the rewrite. Not ultimately related to OF3, but if you enjoy the icons, which I use for my custom perspectives, I can forward you to the perspective icons set created by Josh Hudges.

Another large change is in the inspectors. Whether it is the task inspector or project inspector, it is now possible to customize the meta-data fields. With that, I mean meta-data like Project, Due date or Defer date.

For example, you can re-arrange in which order they appear, or whether they appear at all. Unused features can be hidden so that the UI looks more clean.

With this, OmniFocus can scale from any complexity level between a simple to-do list with just a title and a due date, to a productivity beast with 6 or 7 extra fields like sequential vs. The inspector can be set up separately on every device, so you can have more options showing on the iPad than on the iPhone, for example. Revamp on iPad The iPad is where I would go as far as calling the new design a revamp.

The iPad now features a three pane layout, which is much easier to use than the previous sliding layout behavior in OF2. Tasks can be edited on the right-hand pane while browsing the current project in the middle. In previous versions, the task inspector went full-screen, which blocked the view on other tasks. It is now also possible to select and edit multiple tasks at once so-called Batch Editing, but that is discussed below in more detail. Of course, there is also drag and drop which is also available in later versions of OF2, but now a bit more improved.

With these small changes adding up, OmniFocus on the iPad becomes much more pleasant to use, as it behaves closer to the Mac client. Before I talk about tags, I quickly want to wrap up how contexts worked in OmniFocus 2, just so I have a golden thread on how tags improves on that.

Contexts In OmniFocus 2, contexts were a main metadata flag available for projects and tasks. Every project or task could be assigned with exactly one context. Contexts have had many approaches from different users.

They are distinct subgroups of your life, without too much overlap. Yet another way would be using contexts for different locations. Well, there are numerous other ways, but one main limitation of context, I already mentioned: You can only attach one context to each task or project. Tags In OmniFocus 3, the contexts have been entirely replaced by tags. They work almost identical, so all your previous contexts are just replaced with identical tags. There is one major difference: Multiple tags can be attached to a single task or project.

Therefore, you can be much more descriptive when assigning tags to your data. As you can assign two or three different keywords to each task, you could use a multiple of the above described approaches at once: A tag for time and attention, a second one for location, and maybe yet another one for area of life. If combining with custom perspectives, you could also create perspectives for tasks which have a certain combination of tags, like everything tagged with FullFocus and Blogging but not with SecretSideproject.

On a side note: It would be best practice to minimize the amount of tags. Keeping it simple should reduce noise. A great rule of thumb would be: Give every tag a meaning. A tag has no worth if it does not help you organizing or structuring the data. Only use tags which you want to retrieve, filter or search for, later on.

Forecast Tags Another new feature, which is almost hidden: You can select a so-called Forecast Tag. All tasks with this tag will appear inside the Forecast view, along with other tasks which are due. It is a great new way to implement something like a Today tag, where you can manually add tasks to the Forecast even without a firm deadline and such, no due date. The forecast tag also gets a shortcut button, accessible when swiping a task. Batch Editing There is now batch editing on iOS.

A feature which was always available on the Mac: Just selecting multiple tasks while holding shift, and then adding meta-data like a project for all of them at once. On iPad, this has been one of the major annoyances in why it was cumbersome to use. With the new layout, batch editing is now available on both iPad and iPhone. After clicking on Edit in the top right corner, you can just touch multiple tasks. Instead of switching between them, you toggle them, like you would while holding shift on the Mac.

Then, you can open the inspector and just do changes for all tasks at once. Additionally, there are a couple of shortcut buttons in the bottom - like flagging, or creating an action group of them. More advanced custom perspectives The available options for custom perspectives have been greatly revamped. Previously, it was mostly a way to preselect filtering, and modifying how data is displayed on the screen: A custom sorting, grouping by different meta-data.

It was also possible to include or exclude certain projects or folders. With the new rules logic, this gets much more advanced.

There is a large list of conditionals, so-called rules. For example, whether a tag has a due or defer date, whether it has certain tags, whether it matches certain search terms, whether it has a certain duration. Then, you can use a multiple of such rules and create some kind of logic behind it. Show me all tasks which fit these three rules, but which do not fit these other two.

Perfectly possible with this new feature. Currently, the number of available rules is somewhat limited. There is no date-based filter for due or defer dates, so you could not have a custom perspective for everything deferred more than thirty days or so.

Repeating dates The repeating date options in OmniFocus 2 were a bit confusing, to say the least. You could repeat every X, or defer another X, or due again in X. Each had a different behavior assigned in how it works with due or defer dates already attached. In the new version, this gets much more streamlined. With an easier UI, it is now clearer to set it up and how it will behave. Custom notifications It is now possible to have multiple notifications.

In my previous review of Due , I discussed how it can be handy to have multiple notifications for a single task.

This article walks through the process of upgrading to OmniFocus 2 from a previous version. If you have already purchased OmniFocus 2 Standard and would like to upgrade to OmniFocus 2 Pro, Omni Store customers can do so at a discount at any time by upgrading a license through our web store. Video OmniFocus; What’s in Pro? Explore the three features that define OmniFocus Pro: Focus, Custom Perspectives, and Scripting. “OmniFocus allows me to be my best me by freeing my mind from storing all of my incompletes. With the ease of getting things into it and the power and flexibility of its perspectives to look at what is there, I can confidently tackle my days with a clear mind. 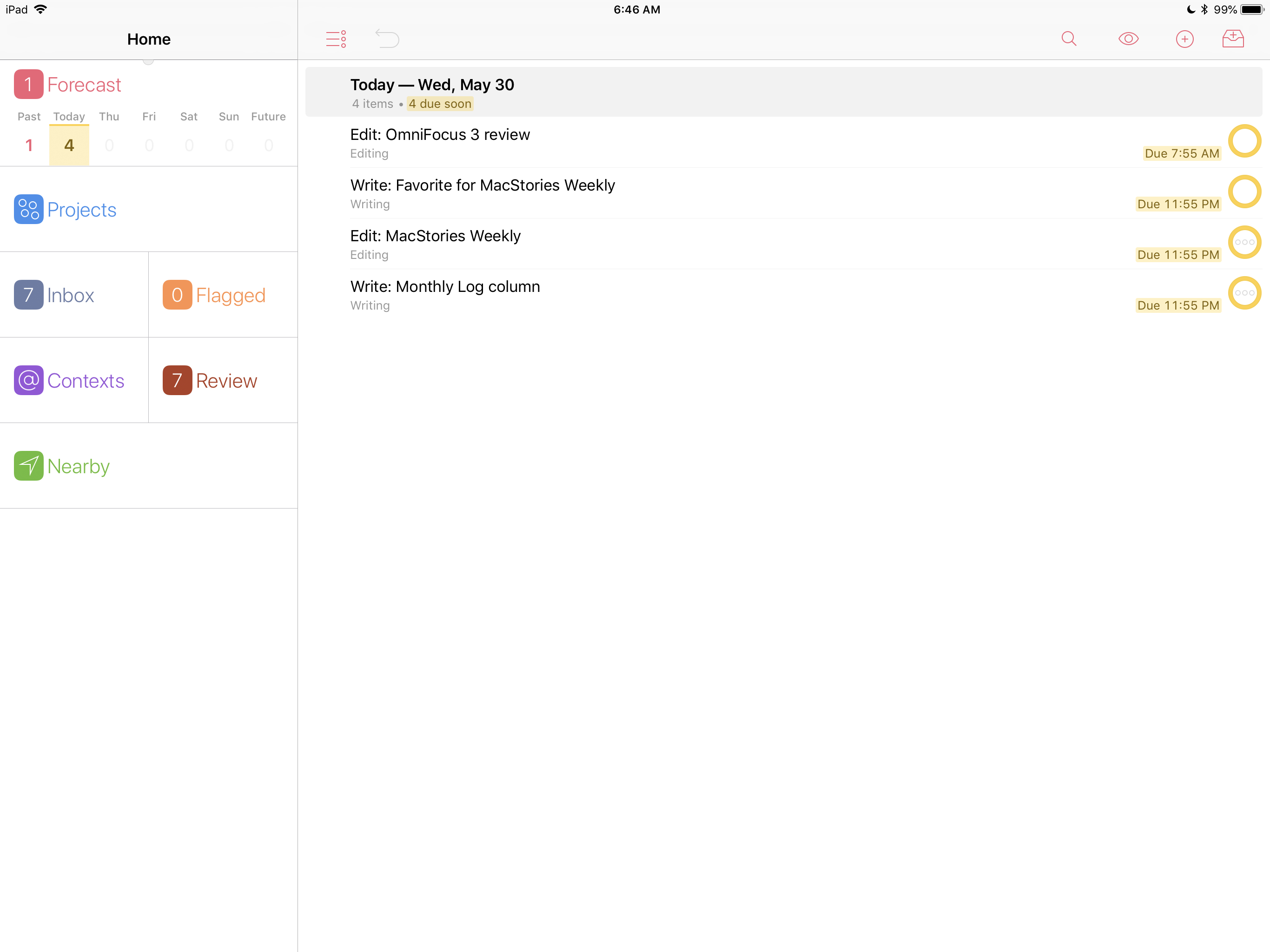 The database format is compatible to another, if you upgrade OmniFocus 2 to the latest version and mitigate the database to the newer format there is no downside to that. There are a few limitations: Repeating dates are more complex in OF3. If synced back to OF2, they will still work correctly, but you are unable to edit them. Contexts have been replaced with tags.